Who Do You Say That I Am?


“Who Do You Say That I Am?”
A Review of Overcomer by Nick Olszyk

Overcomer, the sixth production by independent Christian filmmakers the Kendrick Brothers, has a terrible title. Fortunately, that is the worst feature and has little connection to the story. Like many other Kendrick efforts (Courageous, Fireproof, Facing the Giants), Overcomer has moments of artistic excellence spoiled by dry, labored monologues. Yet, there is a sense that the Kendricks are maturing. War Room was their first great movie, and while Overcomer doesn’t rise to that level, it also signals that the worst is behind us.
Like most private school employees, John Harrison (Alex Kendrick himself) wears several hats. While also teaching history, he is the boys’ basketball coach at Brookside Christian High School. In the first scene, his team narrowly misses the state championship, but he has good reason to believe they will win next year. Unfortunately, a factory closes during the summer and large sections of the town move, leading to a nearly 50% drop in enrollment. With basketball no longer an option, the principal asks Harrison to coach cross country, despite his objections that it is “not really a sport.” His mood continues to sour when only won student, a timid, shy sophomore named Hannah (Aryn Wright-Thompson), tries out for the squad. On a chance visit to a local hospital, Harrison meets Thomas (Cameron Arnett), a blind former athlete who helps him with the ins and outs of the non-sport. Gradually, Harrison learns that Hannah and Thomas have a unique connection and must make a difficult decision.
Other critics have noted that Overcomer is really two movies stuck together: the basketball/cross country narrative and the Hannah/Thomas narrative. The cross-country narrative is by far the stronger of two. Having been a former high school runner myself, the action scenes right true. Yes, people fall. Yes, people vomit. Yes, upon finishing a 5K everyone questions their sanity. It’s absolutely exhilarating. Here, Kendrick and his cinematographer Bob Scott shine. His camera moves seamlessly between athletes as they run, creating a calm pace while keeping the dramatic tension. The editing and light design are beautiful; I was reminded of Eric Liddell’s adage that “when I run, I feel [God’s] pleasure.”
Less compelling is subplot about Thomas and Hannah. It turns out that Thomas is Hannah’s estranged father who left her as an infant after her mother died. Thomas and Hannah’s mother were both drug addicts; Hannah’s guardian is her maternal grandmother. She kept her father’s existence a secret because she blames him for her daughter’s death. In an unthinkable breach of trust (and probably school policy), Harrison goes behind the back of Hannah’s guardian and introduces her to Thomas, who desperately wants to apologize and make up for lost time. Her grandmother is rightly upset, but it’s surprising that Harrison emerges with virtually no consequences for his actions. These scenes between Harrison, Hannah, and Thomas are often filled with long speeches about life and faith. They aren’t bad, just dull. The script during this section could have used tightening.
Despite poor execution, the message of forgiveness and mercy is an important one. Thomas, blinded by diabetes and hospitalized from years of drug abuse, seeks forgiveness and a chance to do something right before he dies. It seems that society, while loosening restrictions in many other areas, is becoming more and more intolerant of forgiveness. Yet Jesus warns us that “if we do not forgive others for their sins, [our] Father will not forgive us.” Forgiveness does not come without reparation, however, and the Kendrick brothers find a clever way for Thomas to contribute to Hannah’s dreams.
Besides redemption, the main theme investigated by Overcomer is identity. When Harrison first meets Thomas, Thomas asks him “who are you?” “I’m a basketball coach,” Harrison replies. “What if that is taken away?” Thomas wonders. “Then I’m a father and husband.” “And what if – God forbid – that were gone?” “I would say I’m a Christian.” Thomas smiles. “You didn’t say that first.” Harrison feels empty because he is putting his worth in something transitory – his career. Thomas, blind and bedridden, could see his own true nature much clearer because he had to learn the hard way. He had his very will taken from him and only found himself when he became a Christian.
Thus, Overcomer is not about conquering obstacles but discovering your true essence as a child of God. Then, the roadblocks are simply opportunities to grow in holiness. Harrison is not a basketball coach but a friend. Thomas is not a drug addict but a father. Hannah is not a wallflower but a daughter. All of them are part of Christ’s Kingdom. Perhaps Kendrick isn’t quite as good a filmmaker as I’d like, but then again, that’s not who he is either.

Paul with his temptress in the background A Modern-Day Faust A Review of Deal with the Devil by Nick Olszyk   Distribution Service: Amazon Prime Year: 2018 MPAA Rating, R USCCB Rating, None Reel Rating, Two Reels                            A fimmaker’s Freshman effort is always an interesting prospect. Benjamin Thomas was a Missouri storytelling whose fist novel Bitter Fish was well received . He then produced, wrote, abd directed Deal with the Devil on an extremely modest budget. I always encourage aspiring filmmakers and appreciate an honest attempt. The movie is an intriguing take on Faust with a modern spin but rough around the edges. Despite its problems, Deal demonstrates the early genesis of a competent artist.             The film begins with a troubled man begging forgiveness in a church. He is approach by another sinister man who attempts to argue the futility of the penitent’s intentions. The scene cuts off quickly, not being fully explained, but nic 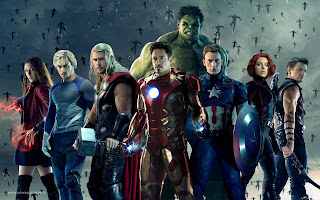 The Avengers with some new friends “Good Old Fashioned Teamwork” A Review of Avengers: Age of Ultron by Nick Olszyk MPAA Rating, PG-13            USCCB Rating, A-III Reel Rating, Three Reels             Avengers: Age of Ultron is the first summer blockbuster of the year, and it opened the season like Hulk bursting through a building: big, loud, and a little disoriented. Our fearless heroes begin almost exactly where they left off in 2012, tying up a loose end from the last film. This mission isn’t enough for one of the Avengers, and he tries to find a permeant solution to Earth’s problems. Although the story is pretty confusing, there’s plenty of laughs and spectacular visual effects; it succeeds in all the right places.             After retrieving Loki’s staff from the first Avengers , Tony Stark (Robert Downey Jr) becomes convinced that the world needs something stronger than the Avengers, something that will have its eyes and ears in all places to prevent futu 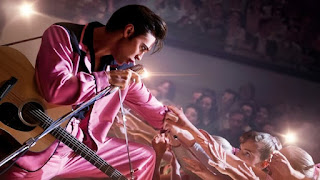 The King “Don’t Be Cruel” A Review of Elvis by Nick Olszyk   Distribution Service: Theatrical MPAA Rating, PG-13 USCCB Rating, A-III Reel Rating, Four Reels                              When examining the life of a great figure, it is best to look at him through the lens of a third-party observer, since that is the role of us. Thus, Baz Luhrmann’s new biopic on the King of Rock and Roll is told through the dying breath of his longtime manager Colonel Tom Parker. History has not been kind to Parker, and he knows it, desperate to convince the audience he is not “the villain of this story.” What emerges is a mostly linear but always exuberant look of at one of the great cultural landmarks of our society. It’s not always pretty but it always impressive.             Elvis Presley (Austin Butler) grew up in a poor Mississippi neighborhood where most of his friends were black Southern Baptists. As a child, he loved music, gospel revivals, and comic books. Parker (Tom Hank